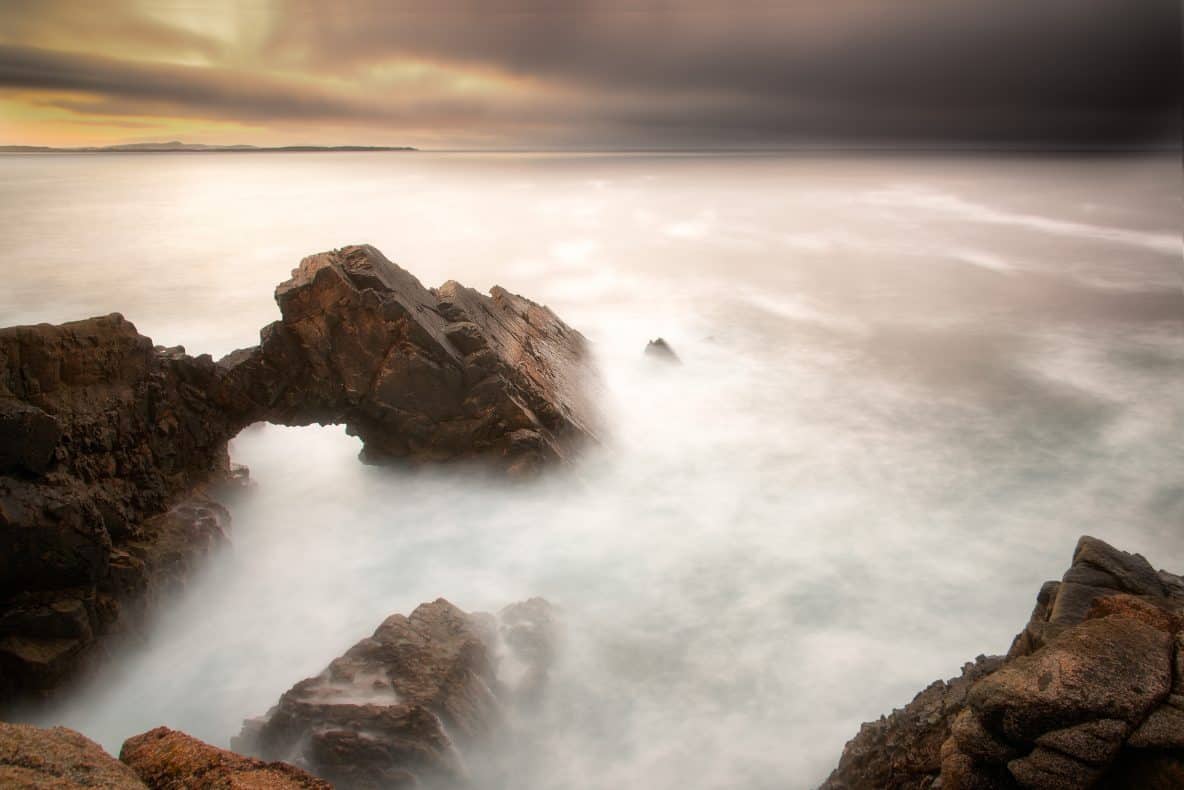 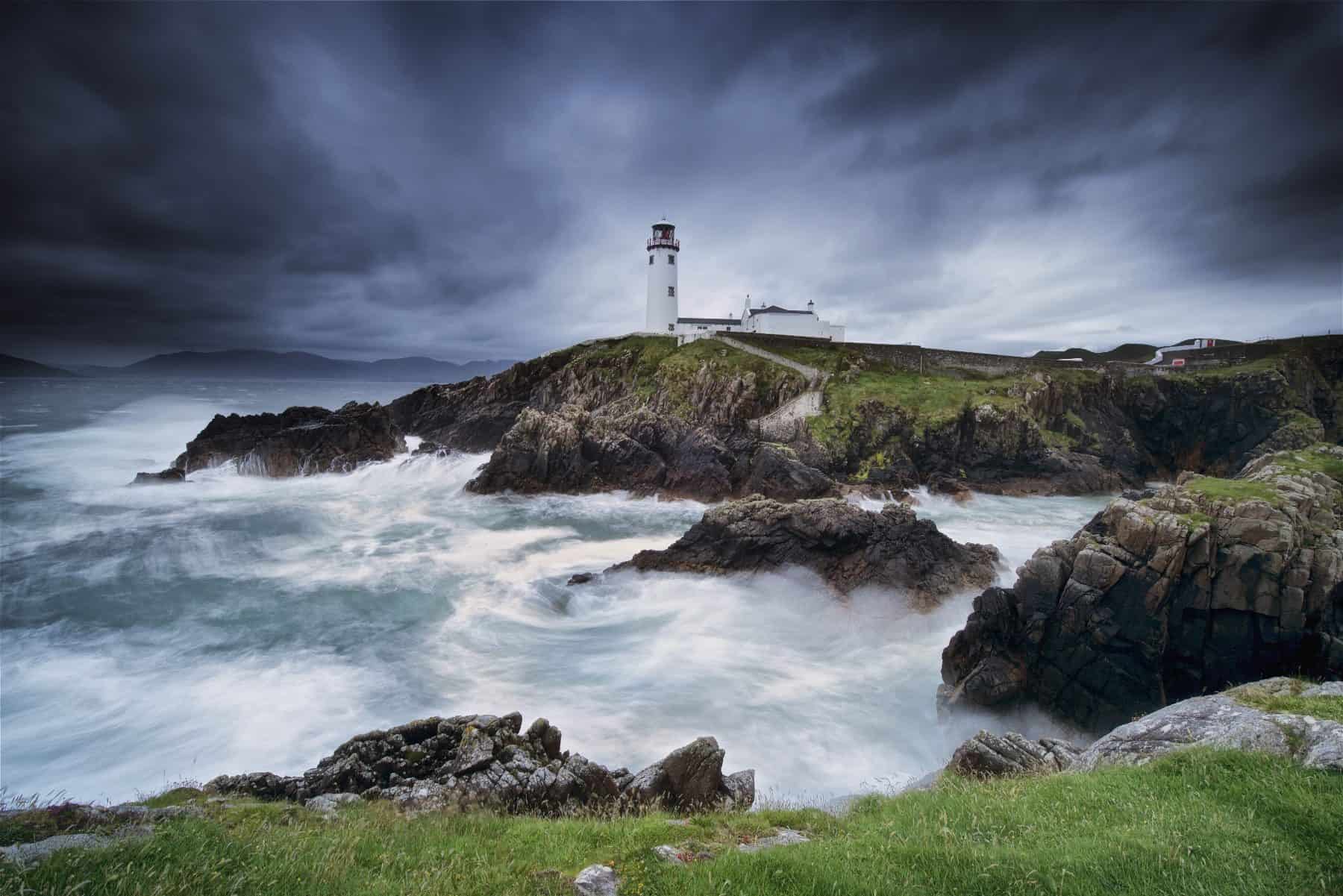 Our knowledge of Ireland and specifically, the Wild Atlantic Way enables us to go to the best beaches, wreck sites, ancient ruins, castles, waterfalls, mountains, rivers and lakes. We will additionally, where possible, visit some of the older pubs which have traditional music and seek out people still involved in traditional farming or fishing practices.

The locations have been selected for their photographic appeal along the highly indented western coastline. The climate is temperate and dominated by the Gulf Stream, with warm, moist summers and mild wet winters.

Ireland has an ancient history with remnants of neolithic culture as well as vestiges from more recent times in the form of castles and old estates. It is a place where people have interacted with the ancient landscapes for millennia and it is this fusion, which creates unique photographic opportunities.

‘Take a shot on the Wild side’

Our first night is spent in Kinsale, a beautiful coastal town in South Cork. If there is time you can wander down the harbour and photograph some of the older buildings of British origin and walk along the quay side.

Overnight in The Blue Haven, Hotel

Today we drive along the south coast stopping at Timoleague Abbey/Friary, Glandore harbour and Drombeg stone circle which is approximately 3000 years old. From there we journey to the small oratory on Lough Gouganebarra for sunset. This small building has an incredible setting with the hills behind and its position on a small peninsula which juts out into the lough. With a little luck we may go to a ‘Trad Session’ in Ma Murphy’s pub!

Overnight at Eccles Hotel in Glengariff.

We return back to Gouganbarra (30 minutes) for sunrise and return for breakfast. After which we photograph a small (little known) waterfall at Donemark. The river is known for its salmon leap. In close proximity to the falls there is an old tannery, warehouses and mill, all of which are derelict and reflective of trade and industry now long gone. We then travel through Kenmare and Sneem to Caherdaniel and Derrynane. Here there are beautiful beaches, rock fringed bays and an ancient ruined abbey (10th Century) on Abbey island which we walk across the sand to. Further around the coast there is Loher Stone Fort and Leacanavuile stone fort near Cahersiveen which we will stop at if time permits.

A day in the Ring of Kerry. Sunrise at Ballinaskelligs Castle (McCarthy’s castle) and a possible visit to the ruined abbey. After breakfast we drive to St Finian’s bay for a few beach and wave shots (if anyone wants to do a few long exposures of wave and rock interaction, this is a good place). We will also stop at a tiny harbour near the village of Glen. Then its onwards to Port Magee where there is a great little pub for lunch and some colourful houses which can be seen more clearly from Valentia Island on the the other side of the inlet. From here we return to Cahersiveen and visit some of the best stone forts in Ireland and Ballycarbery castle if time permits. We may do sunset at Rossbeigh beach (old remnants of groynes)

Time permitting we may take the route over Moll’s Gap to Killarney and visit Torc waterfall and Ross Castle (we may do these on the morning after). From Killarney we go to the Dingle peninsula stopping at the Fahan group of Beehive huts and Coumeenole beach, renowned for its rocky outcrops and high energy waves. Following this we go to Dunquin pier with a spectacular setting with the blasket islands in the background.

Overnight in The Arbutus Hotel, Killarney (or similar) Confirmed

After sunrise at Ross castle - this is a long drive (3/4 hours). We will stop on the way at Adare and Bunratty castle. Afternoon in Galway city – browse and chill. Then onwards to Clifden and overnight at The Alcock and Brown Hotel. 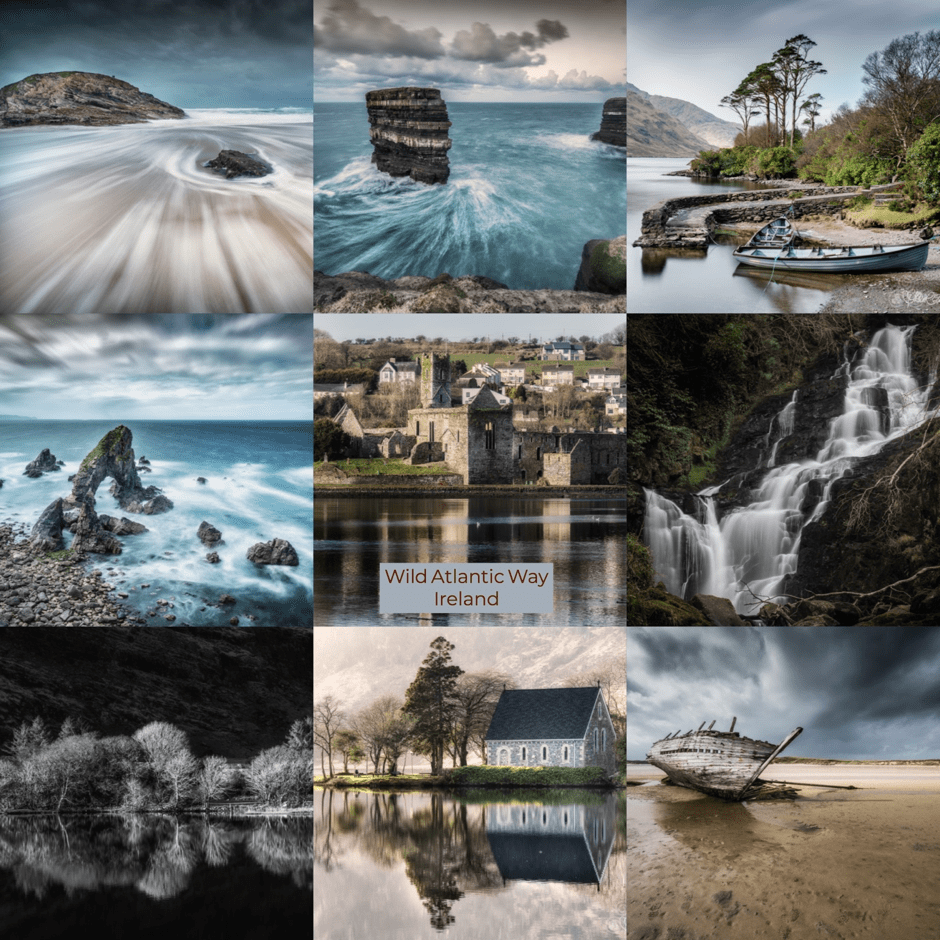 Taking the road to Roundstone. The Roundstone area is renowned for its white sand beaches. Alliebrack beach and harbour and a visit to the Old Connemara Smokehouse to see them filleting the salmon and smoking them. We stop at Roundstone harbour which is very picturesque, often with piles of lobster pots and old Curraghs on the harbour side. We stop here for lunch (crab claws and a pint if anyone wants?) in O’Dowd’s traditional pub.

Overnight at The Alcock and Brown Hotel

After sunrise at Derryclare and breakfast, we will set off for Westport. En route we drive through Connemara National Park, Kylemore abbey, Doolough and Glenullin loughs. There is a small lakeside harbour there which is very picturesque. At Westport we venture down to the harbour and some may want a tour of Westport House. Matt Molloy’s Pub is famous for its ‘trad’ sessions so this is an imperative! It is a wonderful old pub which has somehow managed to escape the ravages of 21st Century refurbishment!!

Overnight at The Wyatt Hotel

En route we visit Downpatrick Head to photograph Dun Briste – an offshore stack comprised of horizontal beds of limestone. A spectacle but only accessible when winds are moderate! Today we pass by Benbulben, Mullaghmore and onwards to Donegal. Time permitting we drive to Dungloe and ‘The Breeches Arch (Crohy Head). This is one of the best sea arches on the west coast of Ireland. It affords the photographer fine views over the Atlantic Coast which is now part of the ‘Wild Atlantic Way. The coastline here is spectacular - a little scrambling may needed to see the arch clearly. We will have lunch in Ardara http://www.nancysardara.com

Drive to Dunlewy via a scenic route through the Derryveagh mountains  – old Irish bridge and ancient ‘roofless’ church. http://www.welovedonegal.com/old-church-dunlewey-poisoned-glen.html We then proceed to Derrybeg and the wreck of Cara na Mara which lies abandoned on the beach – an iconic photographic location. After this we drive to the Bloody foreland (huge cobbled storm beaches and sea arch – spectacular in storm conditions) and back along the coast to Magheroarty (a long spit of sand with some wrecked boats on the leeward side).  Overnight in Dunfanaghy. Overnight in Tatu Anseo B&B

An early drive out for Sunrise at Fanad lighthouse, to the East, on the shores of Lough Swilly. Here, if weather and time permits, we can walk to the Great Pollet sea arch. http://www.ireland.com/en-gb/destinations/republic-of-ireland/donegal/fanad-head/articles/waw-fanad-head/  Following this we have lunch at ‘The Singing Pub’ https://www.facebook.com/singingpub and then drive to the Rosguill peninsula to take in the photographic opportunities found along the Atlantic coast. We walk to Murder hole beach (Boyeeghter Bay) which is pounded by high energy waves.

The above itinerary is flexible and may change to cope with tide times and Irish weather! Where possible we will go to see traditional music in the pubs and arrange to photograph local farmers or fishermen.

Alcohol and occasional stops for coffee/tea/snacks