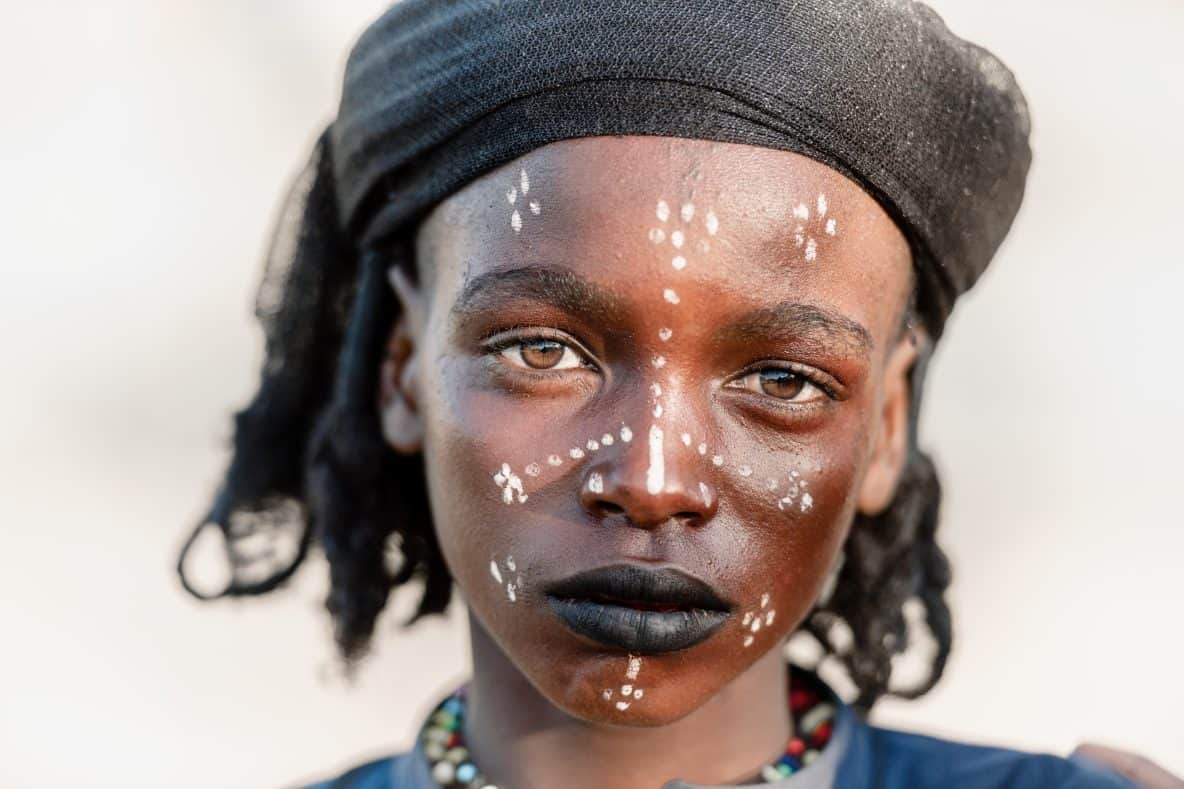 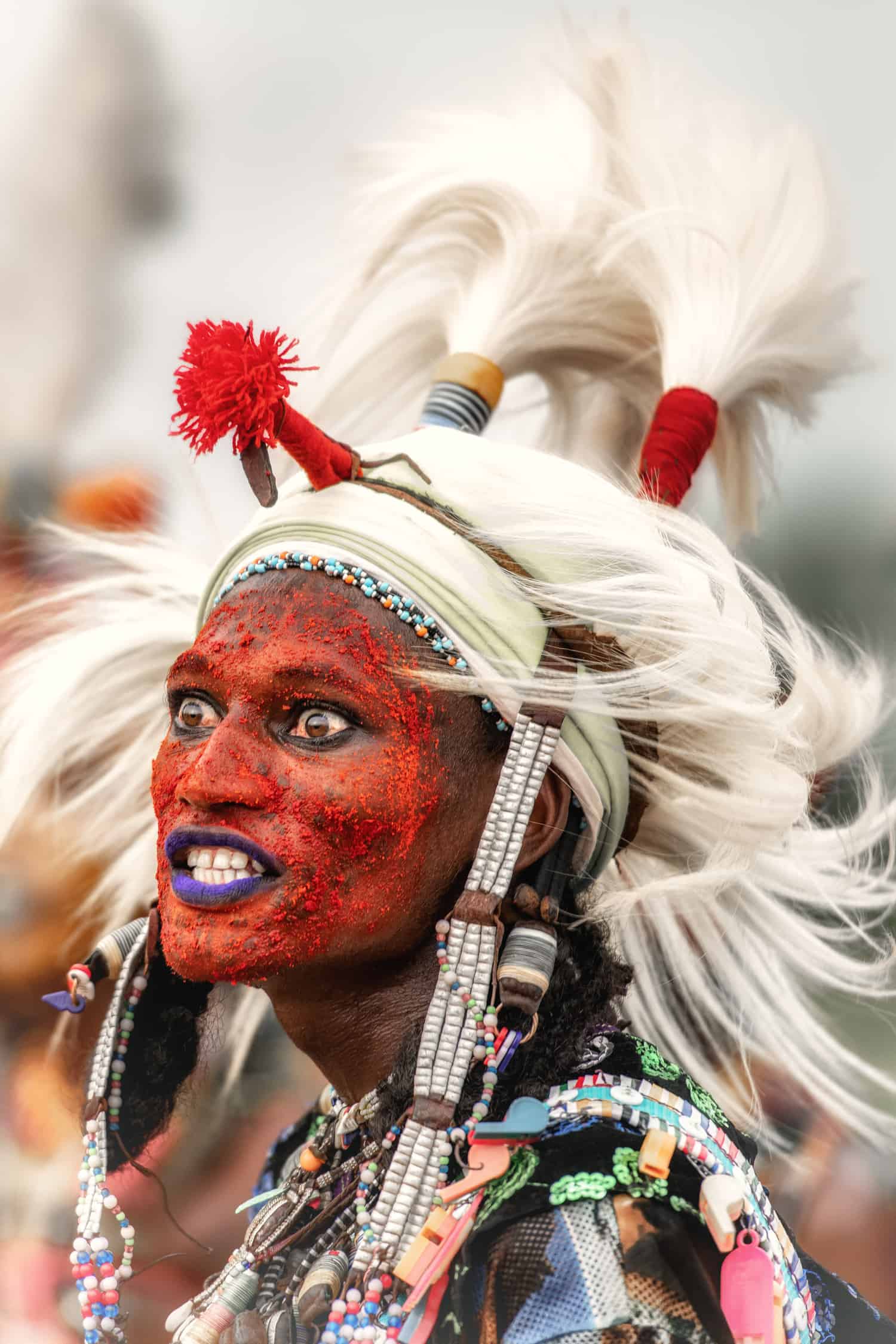 Once a year in Chad the Wodaabe come together in a festival known as the Gerewol. This is a beauty pageant for the men so that they might be selected by the women of the tribe.

The women are usually younger and the men are seen as fair game in a society which is polygamous and polygynous. The men adorn themselves using a diversity of facial paint colours and the whites of the eye and teeth colour are particularly important. So too their outfits which are embellished with beads, buttons and baubles in the brightest of colours. Mirrored tunics and hats add to the exuberance and adornment. The overall appearance with the paint, makeup and outfits can only be described as feminine from our cultural perspective.

They dance like male peacocks or other such birds who exhibit their plumage to attract females.  The male beauty ideal of the Wodaabe stresses tallness, white eyes and teeth; the men will often roll their eyes and show their teeth to emphasize these characteristics. They are animists at heart and this may be why they emulate the animal kingdom.

It is a festival seen by few and we travel to a remote area of the Sahel to immerse ourselves in their traditions. 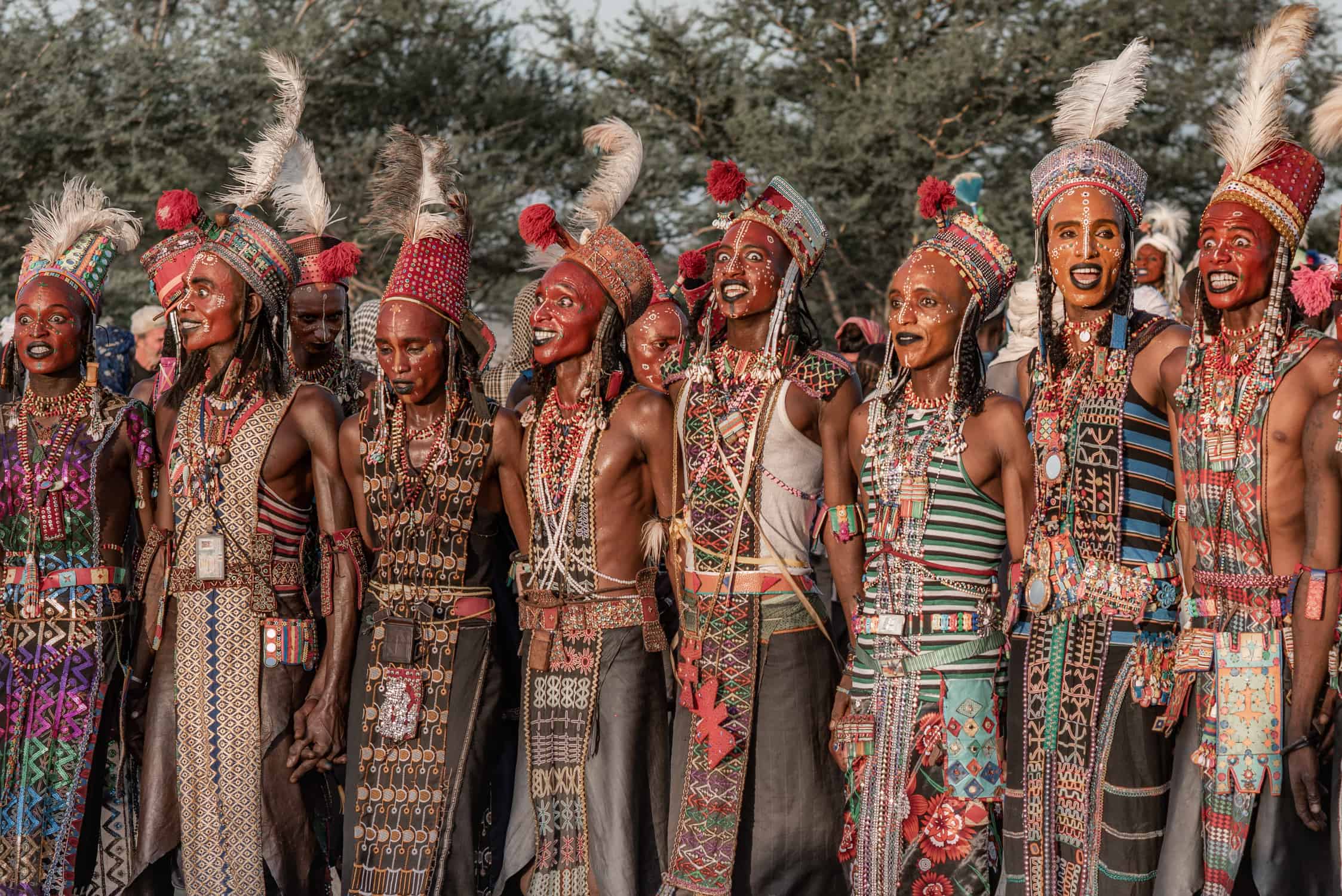 Alternative Visions
‘The Gerewol and the Wodaabe’
3 -10 October 2020

Arrive in N’Djamena and transfer to the hotel. Overnight Hotel Mercure or similar.

Formerly known as Fort Lamy, Chad's capital sits on the banks of the Chari River facing Cameroon and is the largest city in the country. Founded by the French at the turn of the 20th century, it has grown from a town with a population of around ten thousand in the 1930s to something approaching a million now. Over the years it has seen its fair share of conflict, largely destroyed during the civil war of the 80s and stormed by rebel forces in 2008. Its wide boulevards were once flanked with trees, but these were cut down to deprive attackers of covers, and only in recent years did its dusty streets become paved. Rather devoid of traditional sights, N'Djamena is home to a large and sprawling central market which is interesting to explore, and also contains the National Museum with a collection of prehistoric artefacts from the surrounding area.

We drive through the Sahel, to join the Wodaabe people in their celebration of the

The Wodaabe tribe (Mbororo) a branch of the Fulani tribe are nomadic pastoralists who are found predominantly in Niger and Chad, in the Sahel region of Sub Saharan Africa. They speak Fula which isn’t a written language.

A large wooden bed (Suudu) is the most important possession of each family; when camping it is surrounded by some screens. The women also carry calabashes as a status symbol. These calabashes are passed down through the generations, and often provoke rivalry between women. The Wodaabe mostly live on milk and ground millet, as well as yoghurt, sweet tea and occasionally the meat of a goat or sheep.

The code of behavior of the Wodaabe emphasizes reserve and modesty (semteende), patience and fortitude (munyal), care and forethought (hakkilo), and loyalty (amana). They also place great emphasis on beauty and charm.

Parents are not allowed to talk directly to their two first born children, who will often be cared for by their grandparents. During daylight, husband and wife cannot hold hands or speak in a personal manner with each other.

At this festival there are two groups of Wodaabe, the Sudosukai and Japto. They are both scarred facially and on their bodies using razor blades and ash is then rubbed into the open wound. The result is a black tattoo which is slightly keloidal (raised). This scarification starts with very young children and tattoos are added with time. The Japto are more heavily scarred than the Sudosukai. There are perhaps some physiological differences too with the Sudosukai being finer. Many have model like features and all are very slim.

They dance endlessly at this festival with breaks when it is too hot. They have their own ancient rhythms which are repeated over and over. They dance in circles and lines (Yaake) with the latter culminating in choices made by small numbers of girls. To participate in the Gerewol the girls must have menstruated prior to the festival. Effectively when choices are made the girls know they are going to have sex in the bush with the chosen Wodaabe male, if the male accepts them. This may be a one night affair, or last for longer, sometimes culminating in marriage. Men may have a few wives and as women do all the work second or third wives are seen positively by the first wife. If a husband is infertile he may ask a fellow tribesman to impregnate his wife. Children are prolific and are seen as a sign of machismo, wealth and labour. Larger numbers help to offset high infant and child mortality.

Their cattle are also seen as their wealth and they very rarely eat them. They do however trade them for other goods. Their animal husbandry is superb and there is always a very young (less than 7 years old) herdsman. They grow up quickly in such a society. The girls may be as young as12 or 13 when they make their selections at the Gerewol. They have no formal education and their culture is still resilient to an encroaching outside world.

They do not seem to suffer from malnourishment, yet they may only eat once a day and it is predominantly vegetarian using millet, milk and perhaps some cassava or manioc. They are tall, slim and well toned with a life which is endlessly physical.

As a tribe they perform the Gerewol for themselves not for any visitors. Very few have ever seen this in Chad. More have seen it in Niger but instability has curbed any potential tourism. There were only a few photographers and travellers there but the friendliness of the tribe was universal although quite a few were shy, which is part of their cultural code.

They are one of Africa’s ethnic groups with unique cultural practices and exist in Niger and Chad. They are nomadic cattle herders found in the Sahel a semi-arid region in the south of the Sahara Desert that spreads across several countries from the West to the East of Africa.

The Wodaabe speak the Fula language and are a subgroup of the Fulani people, who are spread across West Africa. “Wodaabe” means “people of the taboo,” which is believed to be a reference to the tribe’s separation from the main Fulani culture.

Day 8. 10th October -  N’Djamena and onwards flight in the evening

*Please note that the exact dates of the festival are not decided upon until a few months before. So please do not book international flights until the dates are determined.

The cost of the tour is €5450. To reserve a place there is a deposit of €1000 based on 4-6 people travelling. Payment is possible by Bank Transfer and also by PayPal, in this case an additional 5% will be added to cover the transaction fees (PayPal).  The final balance is due three months prior to departure. There is the option of a luxury camp but this costs substantially more.

I will send out medical forms, gear lists, additional information on the tribes, travel liability forms at a later stage.